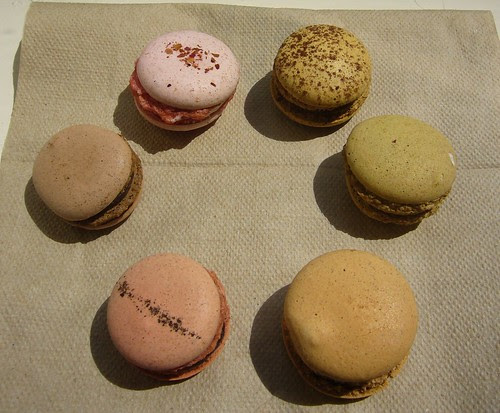 Ask NYC chocolate lovers for their recommendations, and one name that always pops up is Kee's Chocolates (along with MarieBelle). I've read a lot about their unique flavors, but to be honest, I don't really eat truffles or straight up chocolate that regularly (which is why I've still got several bars from the Chocolate Show I went to last year in my fridge). I'd much rather bake with chocolate. But I did trek over to Kee's midtown outpost during lunch today to check out their macarons in my ongoing quest for the best macarons in New York. 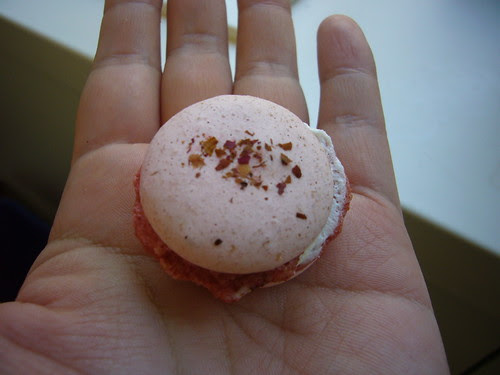 The midtown "store" is really just a counter located inside the lobby of the HSBC on the corner of 5th Ave. and 40th St. Strange location! But lucky HSBC workers! They have a pretty good selection of chocolates, but sadly, not much in the way of macarons. What they did have were prepackaged bags of 4-6 mini macarons (I paid $6 for my bag); check out the photo above and you'll get an idea of their size. I'd say they are about the size of a dollar coin, so...small! But I gather they have "regular" sized macarons at the downtown location, and you can probably select flavors rather than going for a preselected assortment. 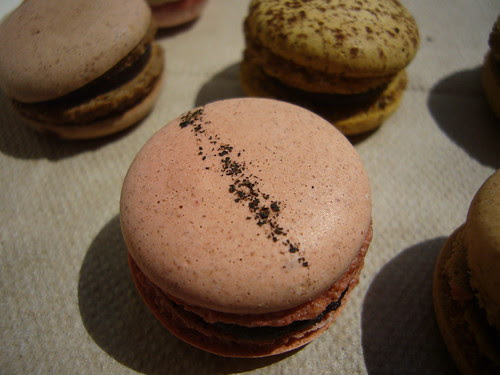 What they lack in size, they make up for in attractiveness. 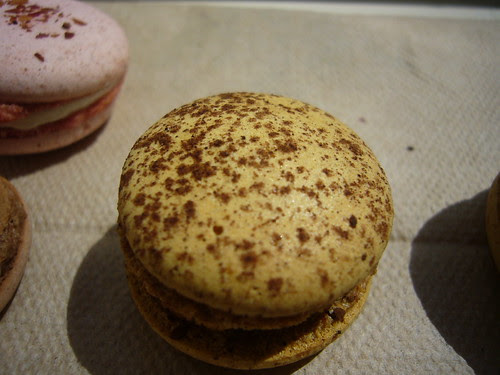 I wish I could tell you which flavors these were, but I neglected to take adequate notes before I scarfed the lot down. I can tell you that I had rosewater lychee (the only one I can still identify), passionfruit, mint mocha, sour sap, green tea with jasmine, and one that I think was plain chocolate. 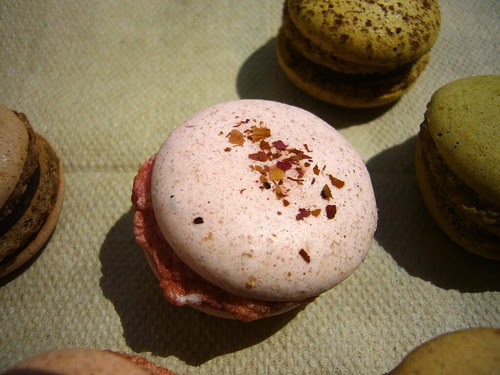 This one was my favorite, followed closely by the green tea with jasmine. One of these days I'm going to have to make it to the downtown store to sample the full range. Well, maybe after a few more trips to the gym. In the meantime, if you're in midtown and feel the need for some chocolate, why not stop in and grab some to go?

Yes, I'm overdue for a post. Unfortunately, summer has finally hit NYC in all its sticky, humid glory, and so I have done precious little baking or cooking (although we have been eating well thanks to our CSA). Mostly I just want to lie around, drinking iced water!

Anyway, the other night we stopped in at Kambi Ramen on 14th St. and 1st Ave. for a bowl of noodles after an evening of drinking at Otto's Shrunken Head (2 for 1 well drinks before 8, apparently!). I love Otto's, but I have learned an important lesson--do not try to chug a Pang's Punch. Seriously. Also, you will find cocktail monkeys in your pockets for days afterwards. Ahem, anyway! 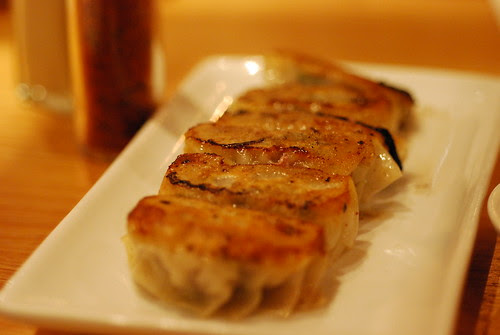 Kambi is a fairly typical ramen joint; it's not a place to linger and have a quiet conversation, but it's great for a quick meal, and the space itself is clean and comfortable with high tables and stools. Sorry for the sub-par photos--I was too hungry to fiddle around with settings. We shared some gyoza, which were filled with pork and were quite tasty, especially the crunchy bits on the bottom. Nice and juicy, too. 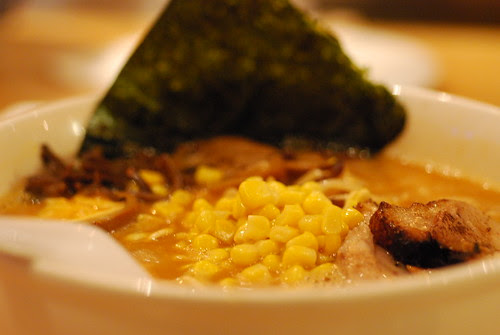 And here is a much-too-close photo of my spicy miso ramen. I know from this view, it's all corn and a seaweed sail, but trust me, the stewed pork served with it was deliciously fatty. And the boiled egg was nicely boiled until just set; no sulfurous, rubbery yolks to be found here! My only complaint was that I was extremely thirsty after I finished my soup, which I will attribute to a bit too much salt. Seriously, I drank two whole bottles of water when I got home.

All in all, a great place to grab a bowl of noodles; that is, if you can resist the lure of the Papaya Dog next door...

As an aside, if you are looking for a way to cool off for a few hours, I highly highly highly recommend going to see Ponyo, the new Miyazaki movie (okay, I know it was released in Japan already, but the subtitled Disney release is out now). I loved it. Probably designed for a younger audience than Spirited Away or Howl's Moving Castle, but still totally enjoyable and magical. Seriously, go see it.
Posted by tofugirl at 10:59 PM 3 comments: 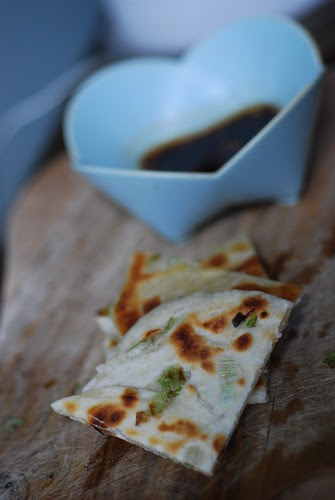 I'm going to start this one off by saying that my mother is an amazing cook. We've always eaten really delicious food, and I like to think that I've absorbed some lessons through the years, although most of my attempts come nowhere near hers. However, there are a few recipes I've learned and perfected, and in the case of scallion pancakes, I think mine are better now. (Don't tell my mom I said that.)

To make 16 5-6" pancakes, combine 3 cups of all purpose flour and a teaspoon of salt. Pour in 1 1/4 to 1 1/2 cups of boiling water; stir with chopsticks (or a fork) until mostly combined. You'll have a fairly dry, shaggy looking mass. Turn it out onto a clean countertop and knead until you have a smooth, pliable dough. You may need to add a tablespoon or more of water, but don't add much more than that--the dough should not be sticky at all. Cover with a towel and set aside while you prepare the filling.

For the oil, combine 2 tablespoons of olive oil and 2 teaspoons of sesame oil. Finely chop approximately 4 scallions, greens and whites--you should have about 3/4 of a cup total. If you have any available, you can add some finely chopped garlic chives as well. 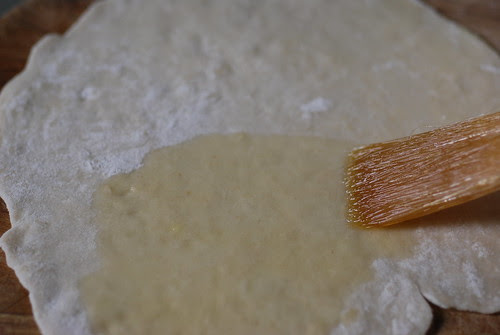 Divide dough into two parts, and keep the one you're not working with covered with a towel. Roll the half into a rope and cut into 8 equal portions. Working with one at a time, roll out into a circle; try to roll it out thinly (less than 1/8" thick). Brush all over with a thin layer of oil, and sprinkle with a bit of salt. 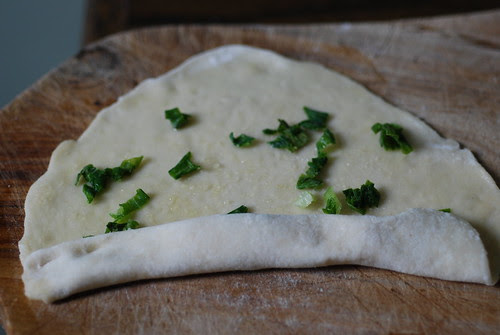 Scatter some scallions evenly across your dough circle. I use about a teaspoon, but obviously you can increase or decrease depending on how scallion-y you like your pancakes. Roll your pancake up snugly into a sausage, like you would a cinnamon roll. Don't worry too much about pinching the seams shut or anything. 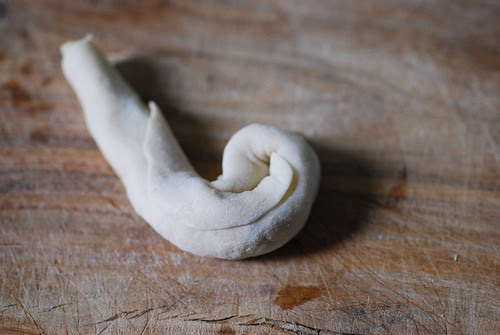 Form your sausage into a coil and tuck the end under into the center. These last two steps are what give the pancakes their flakiness. Flatten down into a round patty. You should end up with something that looks like this: 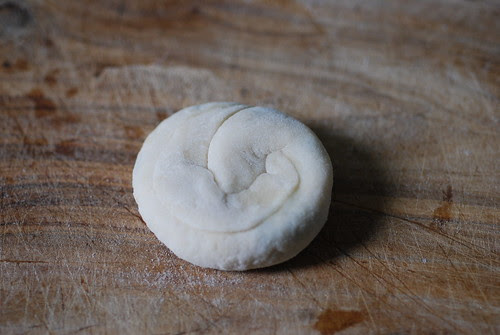 Dust both sides with flour and roll out again into a 5-6" round circle. Don't worry if some of the filling is forced out--you can just poke it back in. Similary, don't worry if you can't get them completely round; they'll still taste good, I promise. As you roll them out, stack them on a plate with a layer of parchment or plastic wrap between each one. If you aren't planning on eating all 16 right away (tempting, but I don't recommend it if you don't have a large group of people. Trust me.), then once you have them rolled out, pack them into a freezer bag and store in the freezer. They'll keep for quite a while and it's convenient to have a stash on hand for emergencies. 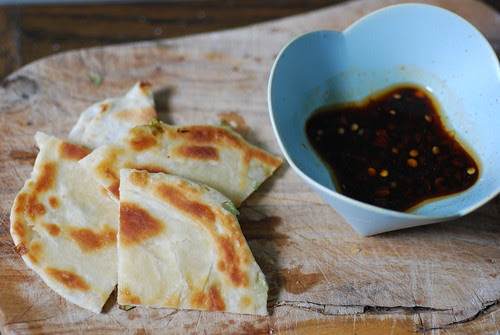 When you're ready to cook them, heat a splash of vegetable oil in a skillet over medium-high heat. When hot, put a pancake in; it should sizzle a bit, but keep the heat controlled so it doesn't brown too fast. When there are browned spots and the surface looks dry, flip the pancake and press down with your spatula. (For reasons I can't explain, this helps to encourage the pancake to puff up a bit, forming flaky layers). Cook until the second side has browned spots. Remove from the heat, cut into quarters, and serve plain or with dipping sauce (in this case, 2 tablespoons of soy sauce, a dollop of sambal oelek, a few drops of sesame oil, and half a clove of garlic, smashed). Repeat as necessary!
Posted by tofugirl at 5:00 PM 8 comments: