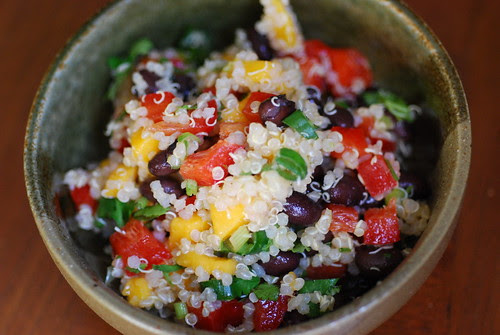 Funny story about quinoa--the first time I tried it, we were inspired by David Lynch. Yes, THAT David Lynch, the genius behind Twin Peaks (I only watched this in the last year but I looooove it). Anyway, one of the extras on the Inland Empire DVD is this hilarious "cooking lesson" about making quinoa! Seriously, you have to watch it--it's available on YouTube here. The man is definitely passionate about his quinoa (and his organic frozen broccoli), but our results based on his cooking lesson were not er, too brilliant. I was definitely not sold on quinoa, nutritional benefits or not.

Fast forward a few months to a visit to some friends in DC, where we were served quinoa salad (along with a brilliant chickpea curry). "Oh no, quinoa," I thought to myself. "I hope they didn't follow David Lynch's recipe." HAHA. No I kid. I actually thought eh, I'll just try a little to be polite. Next thing I knew, I was back in the kitchen, making a giant pile of quinoa salad on my plate, and asking for the recipe. (I'm not sure what the original source is, but I'm reproducing the recipe as my friend sent it.) This is a great recipe for hot weather, it's light, refreshing, and can be adjusted easily to accommodate whatever vegetables you have kicking around that need to be used up.

Serve chilled or at room temperature. I think adding some cucumber would also be great, and when they are in season, diced nectarines instead of mangoes would probably be good too.
Posted by tofugirl at 9:47 AM

That looks great! I always make the same quinoa recipe. Thanks for the new one to try!

I love quinoa but have never found a recipe that I quite like, but this one sounds promising!

This looks like a wonderful quinoa dish.. love the addition of mango. And thanks for posting the link to the Lynch video... so great :)

Eula, this is only the second time I've cooked quinoa, so I'm definitely on the lookout for new recipes--how do you make yours?

Jessica, I felt the same way the first time I tried quinoa--it was just so tasteless! But this is great because of all the herbs and veggies, so try it :)

Trudy, the mango is great in it! Little bits of sweetness :) I love that David Lynch clip, it makes me laugh. I feel like he's probably really intense about everything, but it's especially funny when it involves quinoa and broccoli :)

Healthy and gorgeous recipe, this looks so delightful!!

I really like this recipe - it looks so refreshing and healthy, but not boring or leaving you unsatisfied. I will try it this summer! I bet it would be great with some fresh grilled fish.

amazing salad, so colorful, I love quinoa, so I'll try this recipe :)

Bentobird, thanks! It certainly converted me to be a quinoa lover!

M. & Marie, apparently I am late coming to the quinoa party, hehe. Do you guys have good recipes for making quinoa? Now I want to try all kinds of them!

Jessica, I think it would be awesome with fish, great idea! I've been eating it on its own, straight out of the tupperware it's in...it's pretty hearty!

@tofugirl: My favorite quinoa recipe is adapted from Mark Bittman's "How to Cook Everything Vegetarian". In brief, you brown a sliced onion in olive oil, then wilt a whole, shredded cabbage on top of that, add 2 tbsp of molasses, a few slices of ginger, a cup of quinoa, and two cups of veggie broth. Simmer with the lid on until the quinoa is done. The molasses is KEY, it brings the whole dish together.

The real recipe is called "Quinoa with Silky Cabbage"; it shows up in a google book search if you don't have the book already. It's worth getting if you don't have it, though, the quinoa recipe is just the tip of the deliciousness iceberg from that book!

Love quinoa! This recipe is a must try!

Thanks Marie, I'll look up the recipe--molasses, interesting! I would never have guessed molasses would go with cabbage!

Mary, I hope you like it as much as I did! Thanks for visiting :D

What a pretty salad! Sounds and looks so delicious and healthy.
Thanks for sharing the great recipe!

Oh I forgot to tell you. Your new blog design is so good! I like it better than mine :D

@babykins, aw thanks! well, not that I can claim credit hehe...template ;) I love this salad, I'm thinking about making more today! So refreshing.

Great salad. I'm just getting into Quinoa, and looking for ways to serve it up!

Norman, me too! I'm sort of intrigued by the idea of sweet quinoa, so that might be next in line :)

Just made this, and I'm eating it as I sit at my desk commenting. YUM!

I like things with a kick, so I added some red pepper flakes too. Thanks for sharing!

Hi ChristaLouWho (love your name!), yay, I'm glad you enjoyed it! Thanks for the idea of adding a little spiciness, I bet that would be great! I will have to try it next time I make it :)