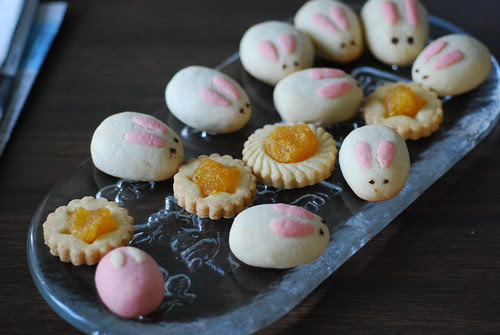 It's almost time for Chinese New Year, woohoo! Actually, it's kind of disappointing because I'll be at work on the day itself as it isn't a holiday here--hm, just once I'd like to experience CNY in Taiwan or Hong Kong, because I bet it's totally insane. Anyway, we had our CNY "eve" dinner early this weekend since we won't be able to do it midweek, but that'll be fodder for another post! In this one, we're gonna talk about baking for CNY! As you can see from the top photo, this year we're having bunny cookies and pineapple tarts. Why bunny shaped? Well, because it's the year of the Rabbit! Fitting, right? (I better not make this a tradition though, or else I'm going to have a real challenge when the year of the dragon rolls around...) 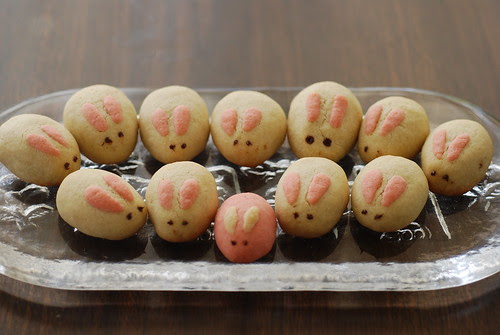 What do you think, threatening or cute? I mean, all those eyes, staring at you without blinking... 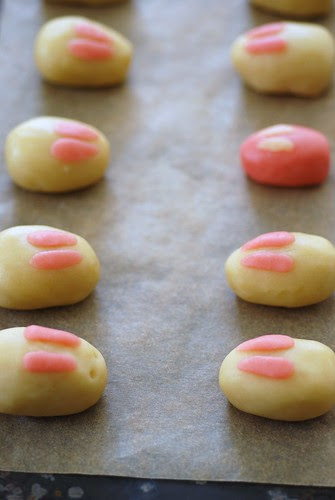 Actually, baking cookies for CNY is not a tradition in my family (although of course, we do have traditional foods). I started making pineapple tarts a couple of years ago after seeing them on other people's food blogs and reading an article about them in the newspaper. This year, my friend Kaimono from Gastronomy Hut was super awesome and sent me some cookie molds for making pineapple tarts, so of course I made those (and they will be featured in another post). But I also was inspired by some bunny shaped wagashi that I saw a few months ago and thought that they could be reproduced in cookie form. 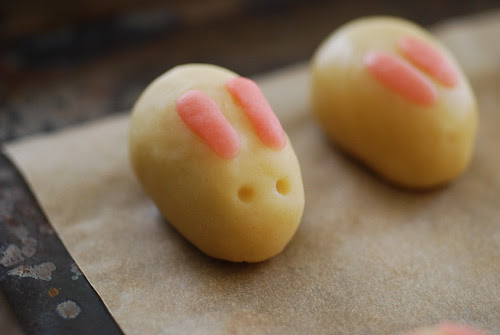 Shaping these is actually really easy--you just roll tablespoons of dough into oval-ish shapes that are fatter at one end. It's the ears that take a long time, and as you can see, mine are all different. That's cool, they're all individuals! Also, I do not recommend actually poking eyeholes in your bunny like I did on one--just pipe or dab the eyes on after baking. 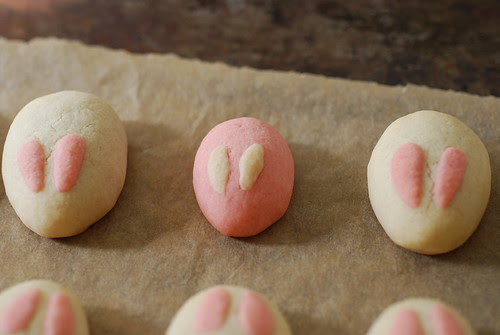 Here are the cookies after baking, but before they got faces. I didn't realize how little dough the ears would take, so I had some extra pink which got turned into smaller bunnies. They're special! 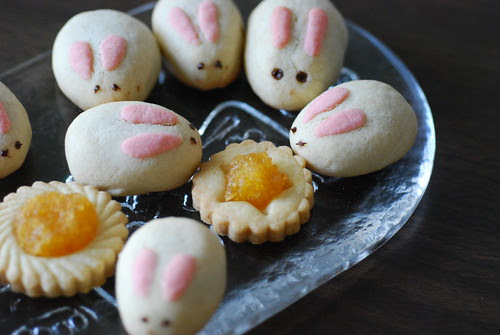 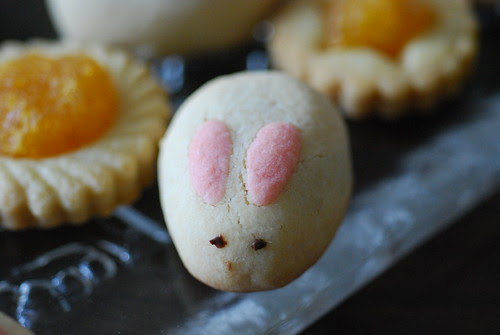 Sift flour and salt together into a medium bowl and set aside. Beat butter and sugar together until fluffy. Beat in egg and vanilla until mixture is smooth. With your mixer on low speed, add the flour mixture in and mix just until the flour is incorporated. It's okay if the dough isn't totally cohesive at this point; turn the dough out and knead briefly until smooth. Pinch off a ball of dough about the size of a walnut--this is the dough you'll use to make ears. If you also want to make some pink bunnies, then break off a bigger piece of dough--it's totally up to you. Use a toothpick and add a drop of dye to your small piece of dough and knead in until the color is even (you should probably not do this on a white counter). For my amount of dough, a drop was enough to get the shade of pink I wanted, but you can adjust. Heck, you can give your bunny blue ears if you want, I won't stop you (but I will look at you funny!). This dough is quite firm, so you can start shaping it right away, but if you find it's too sticky or soft to work with, stash it in the fridge for an hour or so.

Break off roughly tablespoon-sized pieces of dough and roll into a smooth, pear-ish oval-ish shape. (See photos above for reference.) When you have all of the dough shaped, take your pink (or blue!) dough, pinch off tiny amounts (seriously, REALLY tiny amounts) and roll into a "rope" shape. The easiest way I found to do this was just to roll the dough against my palm with a finger. Position one on top of your bunny and press down gently. Repeat for the other ear. It may take you a few tries to get ears that you're happy with, but hey, I think all the lopsided ears add character.

Place cookies on a parchment lined baking sheet and refrigerate while preheating your oven to 350 F. Bake for 15-18 minutes, or until the bottoms are lightly browned and the cookies feel set. The tops won't brown much, if at all. Let cool completely before piping faces. You can make noses, whiskers, etc. but I kind of like the minimalist dots for eyes, which I just made by melting some chocolate and using a toothpick to dot them on. Set aside until the chocolate is set.

Makes approximately 40 bunnies to bring you luck in the new year!
Posted by tofugirl at 7:57 PM

These little rabbits are so adorable! And, for the record, I'm pretty sure you'd make an amazing dragon cookie.. in fact, I'd love to see one! You've got a year to figure it out! ^_^

a frog in the cottage said...

they're so cute !!! it's a heartbreak to eat them

It's so hard to eat them, they're just SOOOOO CUTE!!

Adorable - definitely not threatening. And I actually like both the poked and dabbed eyes. Poked eyes, filled with white then dabbed with brown could be interesting -- or maybe the bunnies would look insane then ;)

Awfully CUTE!!! I want the bunnies ^.~
Thanks for sharing the recipe and I shall forward to my friends :D

SO cute! I love them, they're *almost* too adorable to eat! Almost.

So cute!!! Happy Chinese New Year! I say butt first, that way they're not looking at you when you eat them. :)

This is such a good idea! I love them, so cute! Thanks for telling how to do them!

These are awesome and have such a quirky cuteness--I'd feel just a little guilty munching on them, but this recipe looks so awesome I'd probably need to have them all!

These are so adorable! I'm definitely going to make them! :)

I've always wanted to go to Taiwan for CNY, imagine all the good food... Too bad we don't get breaks for CNY in the US. But anyway, these cookies are super cute! I think they'd be great for Easter as well :).

these are darling. I really hope I have a chance to make some before my whole family convenes at my house on wednesday

@Megg, I'll work on it! They might be less dragony and more lizardy...hmmmm.

@a frog in the cottage (awesome name, by the way). That's why I made a lot of them! I can eat some, give some away, and keep a few in the freezer to look at :)

@Swee San: yes, children would definitely love these :) Happy CNY to you too!

@CarinE: But they're also yummy :) You just have to eat them quick before you feel too guilty! hehe

@Paris Patisseries: I'll have to try that next time--maybe I can give them expressions then. Like cross-eyed!

@MrsJenB: Thanks! I'm glad you like the name of the blog--I always wondered if it was too long :)

@crustabakes: I especially love the little pink ones :D

@Tine: Thank you! But they should definitely be eaten, or else I'm just going to have an army of zombie bunny cookies lurking around my apartment :)

@Dana: Happy Chinese New Year to you too! Yes, butt first seems like the way to go. Or else, popping the whole thing in one bite :)

@Brittany Trei: Let me know if you make them! I'd love to see other people's bunnies :)

@Bentobird: It took a while for me to actually eat the first one, but after that the guilt fades :)

@Joy: Do share pictures if you make them :D

@unmacaronrose: One of these years, I'll have to plan a vacation for CNY holidays and go to Taiwan. Of course, I'd also have to lose like 10 pounds beforehand to compensate for all the food I would eat... Yeah, I think these would work for Easter. And it wouldn't be too hard to change these into chicks, too! Happy CNY :)

@marissa: It might even be a fun project for your family to get involved with, at least for the shaping. that way everyone gets their own personal bunny :D

eeeek!! Terribly cute. These bunnies are almost what I thought I'd make for the rabbit year-celebrating actually! What a coincidence...but I never can make as cute as yours.
Hmm don't worry which to eat first, of course I'll put the whole one in my mouth lol!

Babykins, you should make some :D I bet you and Yuppi can make really really cute ones too! I think I will make them again when it's Easter time...maybe chicks, too! Yah, I just put a whole one in my mouth so I don't have to worry about the eyes staring at me :)

I made the rabbit cookies.... they are sooooo cuteeeee!
I made it for our Chinese New Year Picnic + Hot Pot in the Peak of Hong Kong.... My friend all loves it!

Mia, ooh...I bet CNY in Hong Kong is amazing! I would love to go some year. I'm glad you all enjoyed the rabbit cookies, I'd love to see photos :D